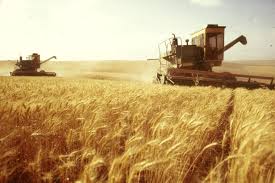 Description of plant. Wheat represents annual upright cereal from 0,3 to 1,2 m high. Breeds seeds (weevils) which burgeon 3-6 germinal roots playing large role in life activity of plant. At emergence of 4-5 leaves from underground node of tillering the secondary root system (crown roots) begins to form. It is mochkovaty, rather narrow, sometimes separate roots get on depth to 1 m and more. Side shoots appear from tillering node of crown roots slightly earlier — when forming the 3rd leaf. In total it is formed from 1 to 6 escapes (tillering process).

Escape (stalk) — the hollow culm divided by nodes into interstices (4-7) which length increases up stalk. Interstices from below are densely captured by vaginas of leaves which from above disperse and pass into freely sticking out smooth, linear blades 1-2 cm wide, from 20 to 37 cm long. Upon termination of tillering stage the intensive growth of stalks due to consecutive lengthening of interstices from below up begins (phase — shooting, or stem growth). In the course of stem growth the inflorescence (ear) climbs stalk and leaves vagina of upper leaf, the plant enters heading phase. The ear 5-10 cm long consists of core on which each ledge sits on cone in 2 parallel rows, from above it comes to an end with cone. Cones consist of the 2nd spicate scales and several flowers (from 1 to 5), each of which is imprisoned in 2 floral scales. At awned ears the external glume bears awn. The flower consists of ovary with seedbud, 2 plumose rylets and 3 stamens. Blossoming at wheat comes right after heading. It begins with the center of ear, then extends at the same time up and down. Blossoming can be closed (at dull or wet weather) or open. Self-pollination prevails. With blossoming approach growth of stalk stops. After fertilization forming, filling and maturing of fruit begins (ripening stage).

The fruit — weevil — consists of densely accrete fruit and semyanny covers, endosperm with outside aleyronovy (proteinaceous) and internal starchy layers and germ. The mass of 1000 grains — 30-50 g. Grain very valuable, it contains 75-79% of carbohydrates, 15-20% of protein, 1,9-2,2% of fat, 1,9-2,1% of ashes and 2,2-2,4% of cellulose. It is used in bread baking as uluchshatel of flour of soft wheat. Generally goes for production of the best grades of semolina, macaroni, noodles, vermicelli.

Now it is the most widespread type of cultural wheat numbering more than 250 versions and several thousands of grades. Grain consists of carbohydrates — 75-80% (generally starch), squirrel — 10-15, fat — 1,5-2,5, ashes — 1,7-2,1, celluloses — 2-2,6%. Flour from soft wheat is widely used in bread baking. Bread differs in high palatability, nutritional value and good digestibility. Baking advantages of wheat flour depend on the content in grain of protein and gluten. Strong flour contains squirrel not less than 14%, glutens — 28%, average — 11-13,9% and 25-27% respectively. The quantity and quality of gluten define volume exit of bread, its rasplyvayemost and porosity of crumb. The soft wheat has the summer and winter forms. It is exclusively plastic look adapted for different climatic conditions, soil types, topography. The culture can be met in lowlands and at the height up to 4000 m over Ur. the seas, in the hottest places and behind polar circle.

Look, the second for distribution — durum wheat (Triticum durum Desf.), which origin is definitely not established. Assume that it came from the Mediterranean where exclusive variety of its versions and grades is revealed. The durum wheat is provided by generally summer forms which cultivate in hotter and dry places in comparison with soft, including in tropics of India, Ethiopia, Argentina. The look is characterized by low-tallness, precocity, heat resistance, resistance to grain fall. Plants almost do not lodge, well use irrigation water that does durum wheat by perspective culture in the irrigated areas. In comparison with soft she is surprised Hessian fly, brown rust and loose smut less, the last is connected with the closed blossoming type. Differs in high requirements to soil fertility and purity of fields from weeds.